Public Event Types – 7 Most Popular You Can Attend 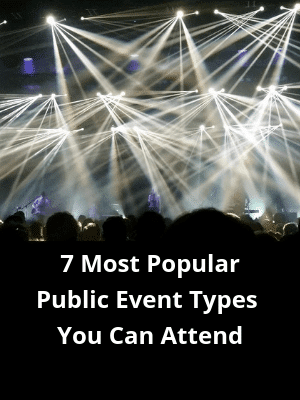 Public Event Types, unlike corporate of private events, are not by invitation but open to everyone that wants to attend.

It is usually large events where you have to buy tickets or admission fees to go to such events.

These events are also not planned by one or two people, but are planned by larger organizations or a group of companies working together to due to the large scale of public events.

This is anything from opening ceremonies for sporting events to conventions with a certain fan base.

Planning any of the public event types can be a challenge and there will be a lot of variables to consider.

So to understand the different types of public events we created a simple list of what the most popular events are and why they are unique.

For more information on the kinds of public events, Aleit Events and other industry professionals undertake to coordinate and manage, just keep reading! We’ll help you narrow down the nature of your event first, so that we can help you plan accordingly!

What Are The Public Event Types?

One of the most famous conventions out there is Comic Con, and yes, the “Con” stands for convention. A convention is a public event held at a private venue, usually a conferencing facility, hotel or the like, that unspecified members of the public have access to and can attend provided they pay the entry fee.

A convention is aimed at the consumer, and is usually not geared toward marketing so much as it is geared toward direct consumption and sales. Comic Con, for example, features hundreds of stores dedicated to selling merchandise from the comic book and broader or related popular fandoms.

A convention is an opportunity for members of the public to get together in order to explore and/or celebrate a shared interest.

Networking events are similar to conventions in that they also bring together groups of people with shared interests, usually professional interests.

However, unlike a convention, the emphasis is not on sales or consumption, but on making new and valuable business connections. Networking events may be invitation only events or completely open to members of the public operating within the specified sector.

Attendees of networking events are essentially there to self-promote while making new connections in their field that may prove valuable to their careers in the future.

Networking events can be formal or informal but are considered public events as they bring groups of people together who have not met before and who may only have the networking event in common.

Press Conferences are held by companies and individuals alike who have just cause to call for an opportunity to jointly brief the media at large on a new development or to make a statement.

The attendees of a press conference are, then, media correspondents for various news and related outlets, such as newspaper journalists, columnists, freelancers, bloggers, television news presenters, reporters and the like.

Press Conferences are public events that may be held in private or public venues and only verified members of the press are typically granted access.

This ceremony to celebrate the opening of a building or event typically features much fanfare and addresses by keynote speakers, stakeholders, shareholders, local celebrities or other individuals of note.

These can be catered affairs, typically featuring champagne and canapes, and these are considered public events because they occur in public places, such as new storefronts, sports stadiums etc. and are well attended by members of the public, whether by invitation or open access.

Performances could include everything from magic shows and performance art in the streets of Cape Town, to music festivals, international recording artists and DJs.

Whether the performance is by a household name, or by a relatively unknown entity, if the public can opt to attend, either by buying tickets or stopping in a public place like Company Gardens to watch, then it is considered a public event.

Performances can also occur at other public events like at awards ceremonies, charity and/or fundraising events.

Award ceremonies can be public or private events depending on the nature of the award ceremony.

Award ceremonies can be invite-only events, or they can be open to the general public as in the case of graduation ceremonies to which formal invitations are rarely extended, and attendees rarely screened before entry.

At first glance, charity and fundraiser events may seem very similar, however, not every charity event is necessarily a fundraising event.

A charity may, for example, host a gala dinner to thank prior contributors, or to generate awareness pertaining to a specific issue related to their charity work, but this event is not necessarily geared toward raising funds, but cultivating awareness or thanking contributors.

Understanding the different types of public events can be very helpful if you aim to become an organizer or are already involved in planning such events. As long as you know the basics and how each event is different, you’ll have something to build from.

If you need to plan a public event, big or small, and have no idea where to start, contact The Aleit Group to help plan an unforgettable event!

What are your favourite public event and why?

Also make sure to read our – Corporate Events and Private Events